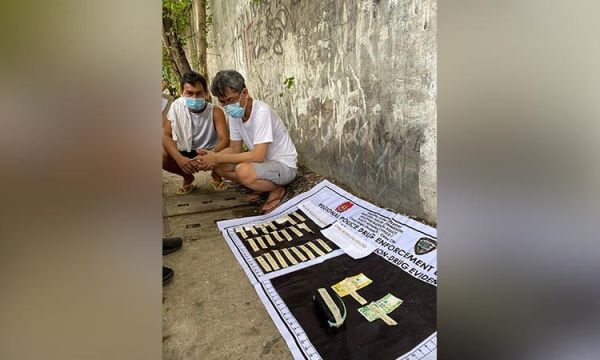 Director of an electronics company, 2 others arrested in separate drug busts in Cebu City

THREE men, including a former electronics store manager, were arrested in separate drug operations in Cebu City on Saturday February 12, 2022.

At around 2 a.m., Anti-Illegal Drug Units from Parian Police Station arrested 24-year-old Paul Datan on Echavez Street in Barangay Lorega, Cebu City, after he was caught selling marijuana in a purchase transaction.

Major Albert Quilitorio, chief of the Parian police station, said he was able to recover two kilos of dried marijuana from Datan, with an estimated value of 300,000 pesos.

Datan, a resident of Sitio Yurico in Barangay Guadalupe, in the same city, had been under surveillance for more than a week before his arrest.

Prior to the bust-buy, Quilitorio said they negotiated to buy a bundle of marijuana from Datan and would meet somewhere on Echavez Street to consummate the illegal drug deal.

When Datan arrived at the scene to deliver the illegal drugs, the police immediately arrested him.

In a separate interview, Datan admitted that he owned a marijuana plantation in the hillside sites of Barangay Guadalupe and would sell them to raise money to buy equipment for his tattoo business.

Datan is currently being held at the Parian police station pending the filing of a complaint against him.

The operation took place around 11 a.m. the same day.

Lt. Col. Ronnie Failoga, leader of RPDEU 7, said they initially targeted Saavedra, but Veloso was also arrested after it was established that the latter was serving as an illegal drug courier.

Failoga said it took them over a week to monitor Saavedra’s illegal drug activities before making the purchase.

Failoga said Saavedra was a construction worker while Veloso previously worked as a branch manager for an electronics company but lost his job due to the Covid-19 pandemic.

Along with Datan, Saavedra and Veloso will face charges in violation of Republic Act 9165 or the Comprehensive Dangerous Drugs Act of 2002.